Making a header row in a Google spreadsheet

Is there a way to put text in a row at the top of a spreadsheet, like a header?

So it is separate and fixed from the columns below it?

In other words, I want a header row at the top and the columns below it in different widths from the columns in the "Header row".

In the menu, go to View > Freeze rows. 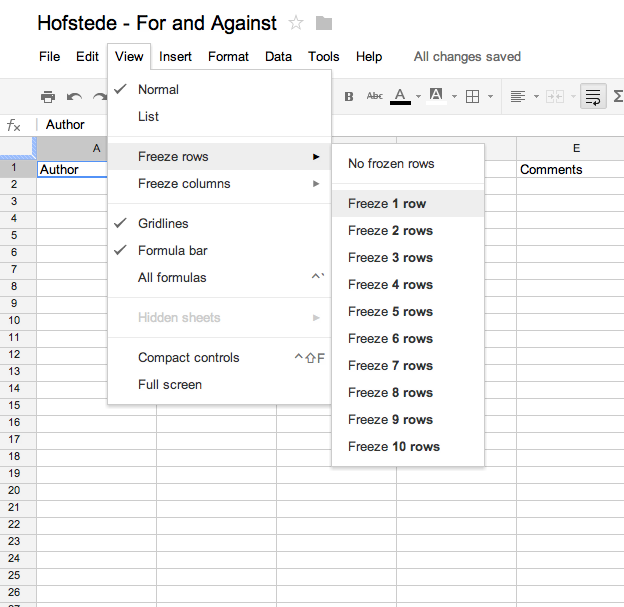 I have a slightly different interpretation, with focus on the columns below it in different widths.

Strictly speaking, the answer is "NO". Each column can only be a single width throughout (uniform). This is typical of all spreadsheet software.

However, in practice, the effect of variable width can be achieved. Using the facility is usually a terrible idea (someone once, quite accurately in my opinion, described 'merging' along the lines of "a tribulation sent by the Devil to test us beyond endurance", sadly I forget whom) but can be justified for use in headers. The usual requirement there is such as for a year, immediately below which there may be a dozen separate columns (so a header split across two rows).

There the columns by month are 'standard' (quite likely not only the obligatory uniform width within each individually, but all twelve the same width as one another) but with their top row of twelve cells merged together to become a single cell - often with whatever is entered there in the middle (centre justified):

Merging may be achieved by selecting the relevant range (such as B1:M1) and clicking on the icon shown at the extreme right in the image above (it toggles).

As can be seen, the headings letters are not altered by merging (there are still 12 columns and each is the same width throughout) but a single cell is occupying 12 columns within one row. This cell is referenced by the column where the merge starts (ColumnB) and the relevant row. So the contents may be used in a formula such as:

Clicking on the icon one in from the extreme right, in the image, when "B1" has been selected will outline with a single long box, not a dozen squares.

A possible use for merging in the above way is given at How do I scroll horizontally by more than 1 column at a time?

Problems however may arise with sorting, exporting to .csv and in numerous other ways.

1
How do I scroll horizontally by more than one column at a time?