A few days ago I uploaded a video to YouTube, and within a few days I seen that the traffic source "YouTube suggested video" (Highlighted below, and blue in the chart) was the main reason why my views per day kept on increasing.

My question deals specifically with the "suggested video" traffic, and not how to get more views. I know a good deal about that; however, my question is specifically if there is a way for the user of a video to get YouTube to suggest your video more often, or no.

I know that they are making a HUGE push for "watch-time" verses "video views" now, and my huge minutes watched count keep the "suggested video" traffic at least level. I completely understand that the videos where I am getting this traffic from could be decreasing in the rate of increasing cumulative views. That could play a part, but that is speculative, and might be pre-mature to make that case.

Anyway, I am wondering if there is any way I can possible increase the "suggested video" traffic? 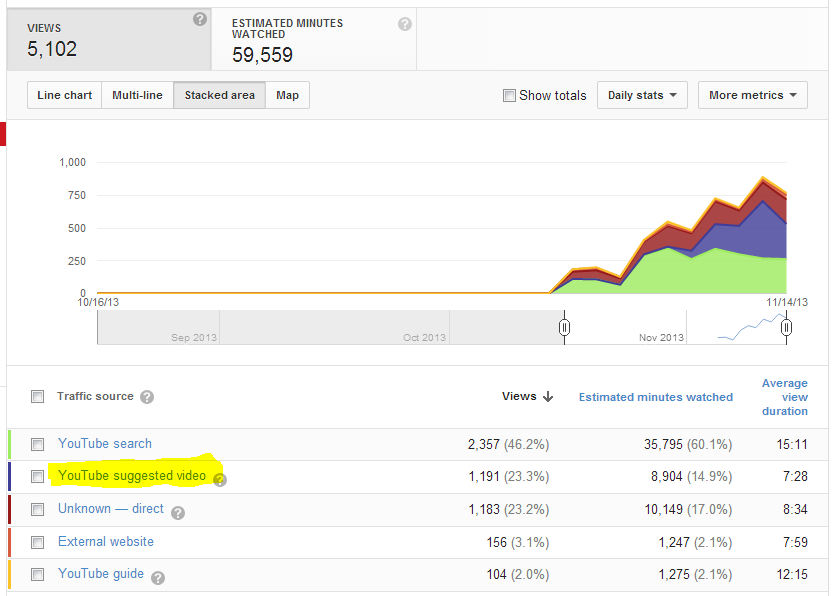 No, suggested videos work off the user's Cache or Google account. YouTube looks back on past videos watched by the user and randomly generates suggestions for them. Although, it is possible that one or more of your videos will be suggested more than once.