I have a strange setup in my email client that I can't seem to fix. I've got two Gmail accounts setup but they're behaving differently. 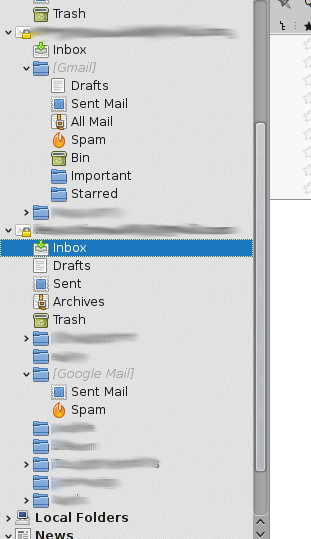 As you can see, the account at the top behaves as I would expect. I get the [Gmail] folder which is easy to setup (infact, Thunderbird automatically setup the folders correctly so that emails go in the approriate [Gmail] folder instead of leaving duplicates when using the web interface).

However, the account at the bottom seems to have no structure to it at all. I get a [Google Mail] folder which contains only a Sent Mail and Spam folder (however, these do seem to reflect the contents seen on the web interface, so I guess it is working) and I also get no [Gmail] folder which seems to cause Thunderbird to create all the default [Imap]/ folders which then show up in the web interface and look ugly and cause duplicates to occur everywhere. I'd much rather have my second account act the same as the first one so that my mail is consistent across Thunderbird, the Web and my phone (using the official Gmail app).

Also, I can't seem to find a reference to [Google Mail] anywhere on the internet so I'm assuming it's not a normal scenario.

So, my question is whether anyone has come across this problem and knows how to fix it?

Browse other questions tagged gmail imap thunderbird or ask your own question.