How to write this formula “If X = Y, TRUE, else(look at this range, find the position, then ”do this")?

Since I don't know exactly the kind of function I'm looking for, be aware that maybe my terminology isn't right to describe what I need to do. I suppose that I need something close to an if/else statement but with an addition that I couldn't figure out so far. 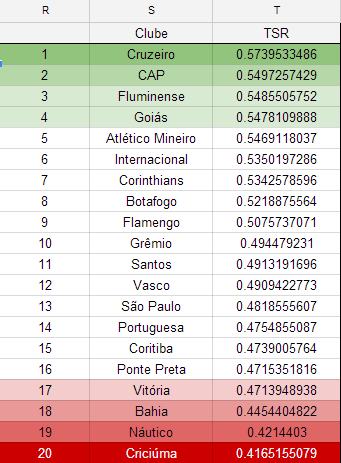 It shows the position of a team according to a certain statistic. But I need to know how far away on the final position on the championship they were at the end of the season. A team can be very good doing a certain thing, but not having all of it to make the first position, for example.

The final position in the championship is this one:

So what I need to do is something like:

Without a helper column maybe:

This is rather inelegant because of the "TRUE" override but basically uses MATCH to find what is effectively the row number to feed to the index function. You have not shown the results you require from your sample data but starting at the top I think the first three applying the above formula (and copying it down to suit) would be TRUE, 3 and 17.

except that for this to work, you would need to put the numbers in the 2nd column (AF) and the names in the first.

One way to do that it to make a hidden column (eg AG), in which every cell says =AE - and then change the lookup range to AF2:AG21.

1
How do I write a formula to compare two cells and write the answer to another cell
4
How to write this Google Spreadsheet percentage calculation function?
3
The function isblank returns True even though the range contains nonempty cells
4
Constrain a Array<string> formula result to a list in a single cell
1
Expanding a column of integers into a column of ranges from 1 to each of the integers?
0
How to Clear Cell(s) based on the Value of another Cell
1
How to Hide/Show Different Rows based on MULTIPLE cell values