What does the "plus sign" do in the new Spotify?

Spotify's mobile app and desktop client underwent a pretty drastic (black) redesign. Overall, it's a welcome upgrade. But one change isn't intuitive: Instead of stars there are now "plus signs." When you click them, they turn into check marks, but that seems to be it. "Plussed" songs do not fall into the "Starred" playlist, as we're used to.

It took me a while to figure this out, and only after digging into the official community help forum did it all make sense.

Stars are a thing of the past for Spotify, and the company is gradually phasing them out. "Plus" is the new star, and plussed songs fall into the songs collection under the new "Your Music" folder. Plussed albums are collected in the "Albums" folder in "Your Music." 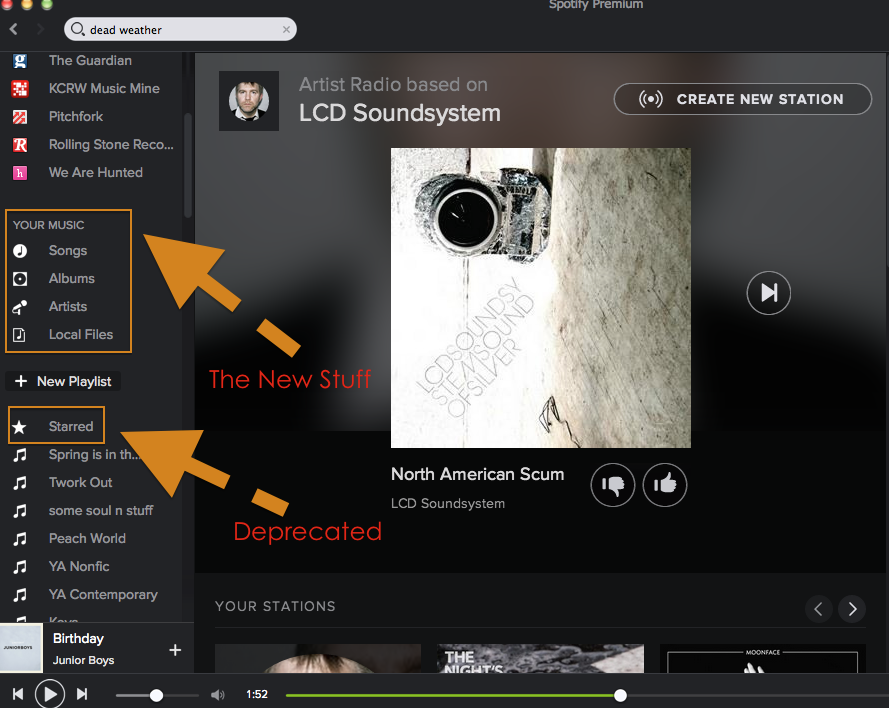 This change may have been made to distinguish "Like" in radio, which influences future plays, from actually "Liking" and wanting to save a song or artist. (One guess.) Presumably, the old "Starred" playlist will soon disappear, or else fall below old playlists so as to hide from view.

To continue having easy access to these old "Starred" songs, it's recommended that you go into the folder, select all, and copy or drag and drop them into the new "Songs" under "Your Music." But don't expect to be able to sort by original date "starred" -- the new date added will overwrite the old metadata.

One major thing that differs the "starred" playlist and the "plussed" is that the plussed will not show up on your profile as the starred one. It's also not possible to set the plussed songs to be available offline.

When selecting the '+' Sign I noticed that all those songs could be located on the Left Sidebar under Your Library in Songs.

Select Songs and all "Saved" songs should display.

Selecting the '+' Sign or Heart icon "Saves" the designated Song to the above specified location.

I am very new to Spotify, so I am unfamiliar with the Star System.

Not the answer you're looking for? Browse other questions tagged spotify or ask your own question.

18
Does Spotify REALLY want my Facebook password? Isn't it against Facebook's privacy policy/TOS?
2
How to see what tracks I've sent to friends in Spotify?
5
How do I reorder the tracks in a Spotify playlist using the web player?
1
Does the Spotify web player (play.spotify.com) user peer-to-peer connections?
1
How does linking Spotify to Uber effect the Uber experience?
1
How do I navigate to the album in Spotify?
0
Spotify can't play the current song