Code invoked too many times

Script invoked too many times per second

error, and adding Utilities.sleep(500) at the end doesn't help either. Here's my code so far. Please excuse the ugliness, as I'm a very beginner programmer.

You may not need a script for this as a formula of the kind:

copied down to suit may serve where D1:E20 is a table of the kind:

This could be in the same sheet but seems sensible to hold such 'reference' data in a separate sheet (in which case the formula above would require the addition of a sheet reference).

If double-clicking works for coping down the speed is about the same as for a user defined function and may even be faster, though neither should take more than about 10 seconds for 2000 rows.

Make sure to add the rest of the criteria yourself !!

I've created an example file for you: code invoked too many times

I'm assuming this is because calling a custom function takes a lot of memory (going through the existing functions [possibly in Google's servers] to see if it's there, then turning back to execute it). You need to make it so that it will be only called once instead of 2000 times. The fact that you added sleep() did nothing because it's unreachable (you are always returning before you get to that statement), but, even if it wasn't, it would only make it worse because it doesn't sleep between invocations, but rather after each invocation.

Your code is a little funny, and I was especially amused at the else clause at the end. I couldn't find a pattern for your ranges so I just stored all the upper bounds and their respective outputs in two arrays. In addition, for the code to only be invoked once, I made it so that you have to choose what range you want and it returns an array (each element is outputted on a different row). Check it out:

Note that the parameter is a range. Meaning that it will be in the format of <cell1>:<cell2>, U1:U20 for instance, but it's NOT a string. The first number is the first cell (in the example U1), the second is the last cell (U20). You can also select the region you want to help you get the range: 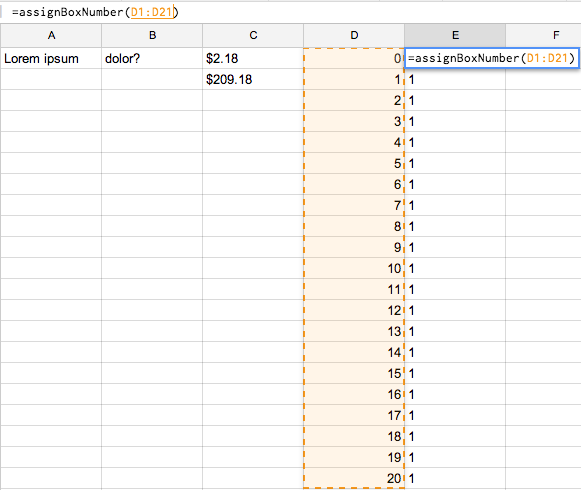 But obviously for 2k+ rows you want to write it in. So call the function like =assignBoxNumber(<first cell>:<last cell>).

UPDATE: Fixed the arrays and now the output is completely identical to that of your messy method.

Not the answer you're looking for? Browse other questions tagged google-sheets google-apps-script google-sheets-custom-function or ask your own question.