What does the “YELLOW - L” label mean on a YouTube video?

I was looking on the Let's Play YouTube channel and saw a video with a YELLOW - L tag under it and was wondering what it meant. 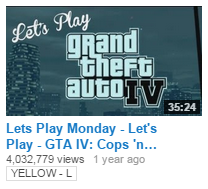 It is YouTube's rating system (even though justification for its existence is suspect given how difficult I found it to prove that!)

If your business is a content partner with YouTube -- meaning that you have uploaded at least one video that YouTube has approved for monetization -- then you can rate your videos according to a color code. For example, if your video has no strong language, nudity, violence, sex or drug use in it, then it gets a "green" rating. If there's a mild amount of the aforementioned elements, it gets a "yellow" rating; and if there's a strong amount, it gets a "red" rating. If you apply a "no rating" label to your video, YouTube will automatically age-restrict it to viewers over age 18.

Then the letter codes: 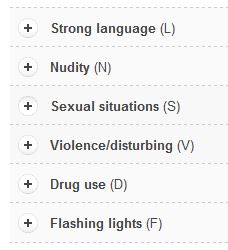 And finally some blurb from the same place:

When a user views a video with a YouTube content rating, the page displays the letter code for each rating category that has a value other than None. For categories where you've chosen the third option, a plus sign appears after the letter code. For example, the YouTube content rating for a video with explicit language, mild violence, mild drug use, and no nudity or sexual situations would appear as L+ V D.

There may be some differences between the categorisation of games and other videos.