How do I add a curve or arc to a diagram on draw.io?

I have looked through all the available items but cannot find a curve or arc to add to my diagram. Is it there somewhere?

For a curved connector, you can find that in the general shapes section: 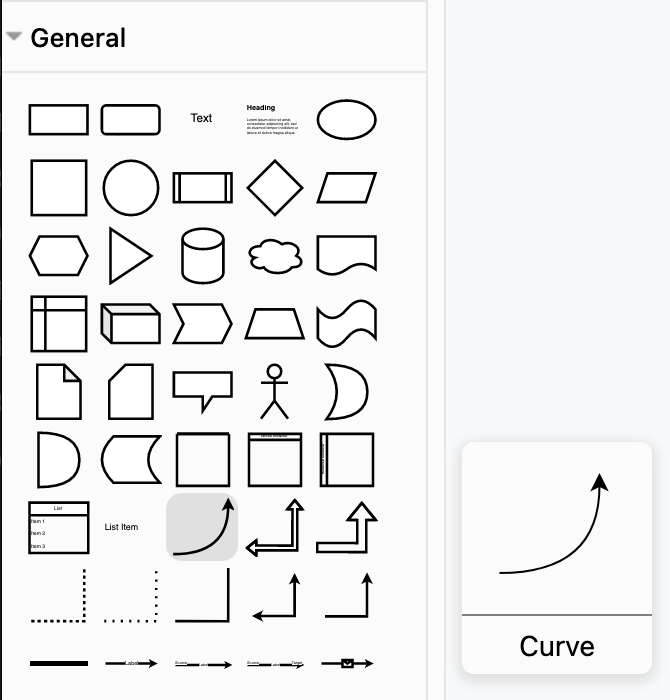 Once the curve is in the editor, you can add and drag the waypoints of the curve. Select the curve and waypoints appear as blue handles:

The basic shapes library contains both arc and pie shape (near the bottom). If you drag those into the editor and select them, both have orange handles (indicating you can alter the shape), these allow you to change the angle around which each shape is drawn: 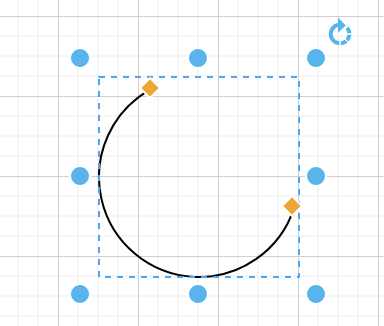 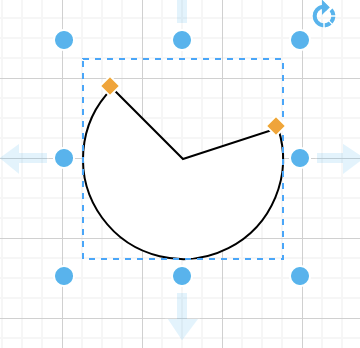 If none of those options work, there is also a freehand mode where you could draw a freehand curve: 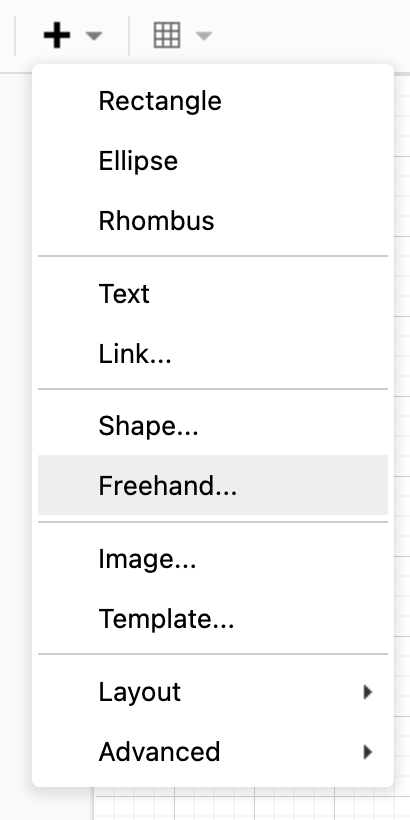 A more manual approach to getting curves in draw.io, is to edit the shape of some element. This allows for three different variations of curves, <arc ... />, <quad ... /> or <curve ... />. The image show these three curves, and further down is the code needed to produce these elements. The image has some extra guidelines to help illustrate the curve generation.

Shape and style can edited from the Format Panel Ctrl+Shift+P in the Style tab, and there you have some buttons aptly named Edit Style, Edit Image, and/or Edit Shape. Which buttons are showing depends on the selected element.

For this answer we're focusing on the Edit Shape button, and to display it we start by adding a Basic > Star to our drawing. Draw.io has some documentation on editing shapes with a small example, and a reference to the SVG documentation on drawing arcs, which was the basis for me experimenting until I found the code examples used in this answer.

For each of the examples below, insert some element with a shape, select it and click the Edit Shape button. Insert or edit the text within and either hit Preview for a preview, or Apply to close the dialog and see your final result. The final result of this code, with some added guidelines results in this image:

The arc is the based upon two ellipses which goes through the base point, and the specificed point. As these actually form four different paths from the base to the end point, you have to chose which of these paths you are using.

Here is example code for a pie segment of 240°:

Here are the details as to why this code draws a pie segmennt of 240 degrees:

Note that if you only want the arc segment, you can drop the line and close tags, and replace the fillstroke with a simple stroke. Do experiment with changing the sweep-flagand large-arc-flag, and the other tags. In my example I've used rx=ry=1 which transform the ellipsis into circles, but do experiment with change the radius, sweep or large-arc stuff, and see what happens.

Some other coordinates to get some standard angles are as follows:

Note the use of move to specify the base point, and then the daisy chaining of arc and line (and you could have used quad and curve) to produce a longer path.

This kind of curve can be useful when you want to control the angle of the start and end line segments of the curve. That is, if you want to make multiple curve segments, and want them to have nice joints.

The final curve shape, are using two control point which kind of works as gravitational pulls on the line until the end point. Here is the code:

Note that I've used the upper left as start point, and lower right as end point for both the quad and the curve, this can of course be changed if you want another general direction of the curve.

One of the way to draw arcs is drag the Bidirectional curve from the Misc panel to the drawing area and then click on the curve to see the "blue colored" points known as "waypoints". You can remove these waypoints to alter its structure. Right click and select remove waypoint. Remove unnecessary way points until you have only 3 way points , 2 at the edges and one anywhere in between. By dragging the waypoint that is in between the 2 way points you can get a curve of different curvatures.

Simply paste the following text in the edit style:

Then, you can make an arc of any angle.

Thank you very much for this.
How do you add arrows to the ends of the arc? I am writing my first geometry paper, and would like to represent arcs with arrows, as in the old days of hand-drafted drawings.

5
In draw.io, is there a way to automatically position a swimlane or process diagram?
7
Add more fix points to a Data Flow Diagram using Draw.io
4
How to share a draw.io diagram to receive comments or feedback?
2
How to iframe embed a draw.io diagram into another site
3
How do I add class to package in draw.io
2
draw.io - Tree diagrams in draw.io no longer behaves as a tree diagram
2
How to rotate a curve in Draw.io?
0
How to import Visual Paradigm Business Diagram into Draw.io?
1
How to change the number of cells within each main grid area in draw.io?