Google says I need to “verify” my account. I don’t want to give up my phone number to Google. Are there any ways to bypass this? I’ve already tried changing my IP address.

It doesn’t matter how I register with Google, through Gmail, or from an Android device. They still ask for phone verification. Nothing works. I tried throwaway numbers, but apparently Google made sure to blacklist all numbers from VOIP services. 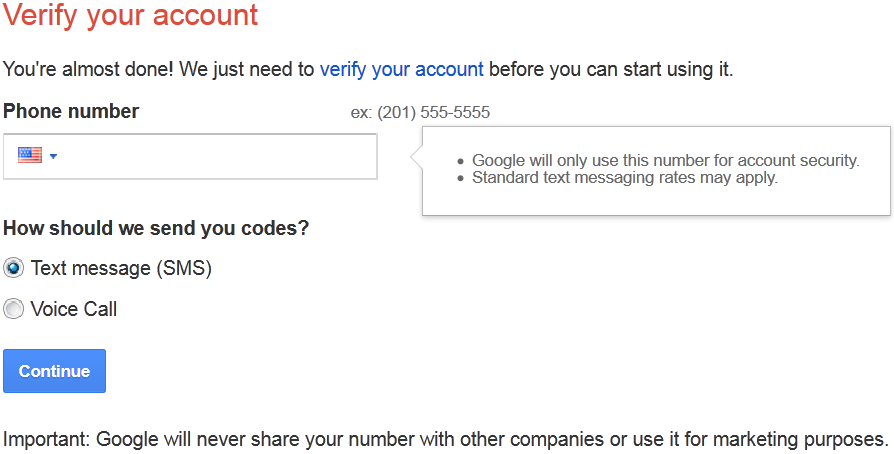 Unfortunately, this is not something you will be able to do with Google. Maybe 10 years ago you could set up “burner” disposable e-mails with Google—and other services—but the increased use of free mail services by spammers and scammers has made 2-factor authentication a way of modern tech life.

The the general idea behind 2-factor authentication is that by having a real phone number to check against, a service can check if you are a real person. And given most people have phone numbers—most likely connected to a mobile phone—in the year 2014, this is a commonly accepted way of verifying who you are.

As Google states in their help center:

In an effort to protect our users from abuse, we sometimes ask users to prove they’re not a robot before they're able to create or sign in to accounts. Having this additional confirmation via phone is an effective way to keep spammers from abusing our systems.

Also, if you want to have multiple e-mails connected to a phone number you can, but it is not unlimited:

The reality is you really will not be able to get a Google account of any kind without a phone number. And if you are attempting to get a disposable number and it does go through, the reality is sometime in the future Google will randomly require you reverify your number to make sure the person using that account is still in control of that phone number. So there’s no way to do an “end run” around this. Want a Google account? You need to provide a phone number.

40
How can I get around giving my mobile phone number to Google?

4
How to set up a Google/GMail/GoogleDocs account without a phone number?
0
Two Gmail accounts exist with same email id
1
I updated my Google phone number but it won't update on my YouTube channel