I am using emoji in a slide show. However, when I play the slideshow, the emoji show up in Black & White.

Any idea how to fix this?

I know I can download the show as a .pptx file but I also want to include some YouTube videos which is why I need to keep it on Google Slides. 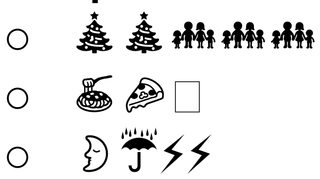 The emoji characters render differently on different platforms: see the comparison chart. This depends more on the operating system than the browser. Here is a comparison of Pizza slice character:

(All from Chrome browser). And this is the character itself, rendered by the browser you are using currently.

This variety is hardly acceptable for online-based presentation, which are often delivered from a computer other than the one on which the presentation was prepared. At present, Google deals with this by using an SVG font (apparently, their own), for example this is their rendering of pizza slice:

This makes the Slides platform-independent, but at the cost of not having colorful (possibly proprietary) icons.

As Rubén suggested, inserting images works; you can copy-paste an image into a presentation, taking it, e.g., from fileformat pages.

As I understand, the emojis that the OP is talking about are UNICODE emojis.

Unfortunately, at this time the Google Slides presentation mode doesn't display them in full color, so instead of using UNICODE emojis, use images. For that, you could take a screenshot and snip out the emojis.

UNICODE emojis are pictorial representation of concepts that could be used inline with text and they not have to look the same (1,2).

Google Docs, Google Drawings and Google Slides allow the insertion of UNICODE emojis among other symbols through the menu Insert > Special Character..., by copying and pasting or by pressing certain key combinations, but not all the special characters are available for all combinations of operating systems and browsers, in such cases a "tofu character" (an empty box) will be shown instead. But even if the special character is being displayed correctly and in full color in Google Slides edition mode, it could not being displayed in the same way in presentation mode.

Test 1: I created a presentation with one blank slide including only a text block to hold the

Test 2: I added alphabet characters, they also were rendered by using svg > path html tags and being drawn.

After researching a bit today I found an article (3) where there are compared the use of icon fonts Vs. inline SVG and another where the use of inline SVG is explained including how to apply color to UNICODE emojis. I think that the Google Slide developers should read these articles :)

As a workaround, I inserted the emojis as images by copying them from emojipedia. This is the only way to get exactly the emojis I needed.

Not the answer you're looking for? Browse other questions tagged google-slides emoji or ask your own question.

11
How to prevent Gmail from transforming Unicode characters to emojis?

4
Can a Slackbot create emoji?
8
Embedding YouTube video in Google Slides at specific time
6
Word count in Google Slides?
9
Batch-import folder of images into a Google Presentation
3
Google slides download animated pdf
0
How to download a video from Google Slides
0
Is there a way to make Google Slides treat Animated GIFs as click-to-play instead of auto-play?