How can I remove problematic Skype enrollment pop-up from Outlook.com?

I have an old Hotmail account that Microsoft converted to an Outlook.com account. Starting a few days ago, I have been blocked from access to my email (via Microsoft.com web access), by a pop-up that requires action on a Skype account. I have been unable to block or bypass this pop-up: 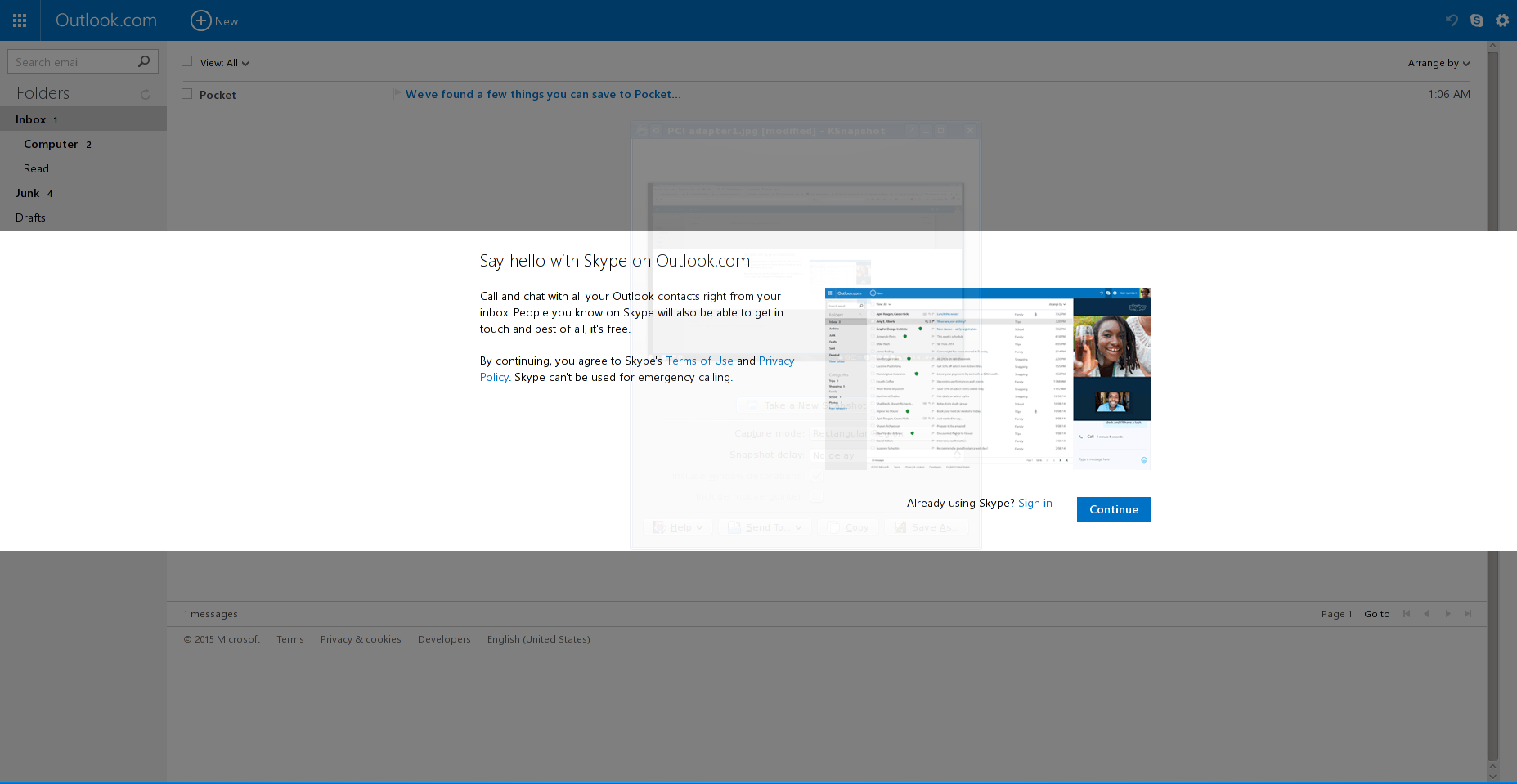 I've found posts online describing a possible solution of removing or opting out of Skype integration from within an existing Skype account, but that requires creating an account. I also found advice online for modifying the Windows registry to remove Skype, but I use Linux, so that's not a help.

I managed to get into my Outlook.com user profile before the pop-up loaded, but the only option there was similar access to signing up. I logged into Skype with the Outlook.com credentials. However, since I don't have a Skype account, it took me to a Skype sign-in/sign-up screen: 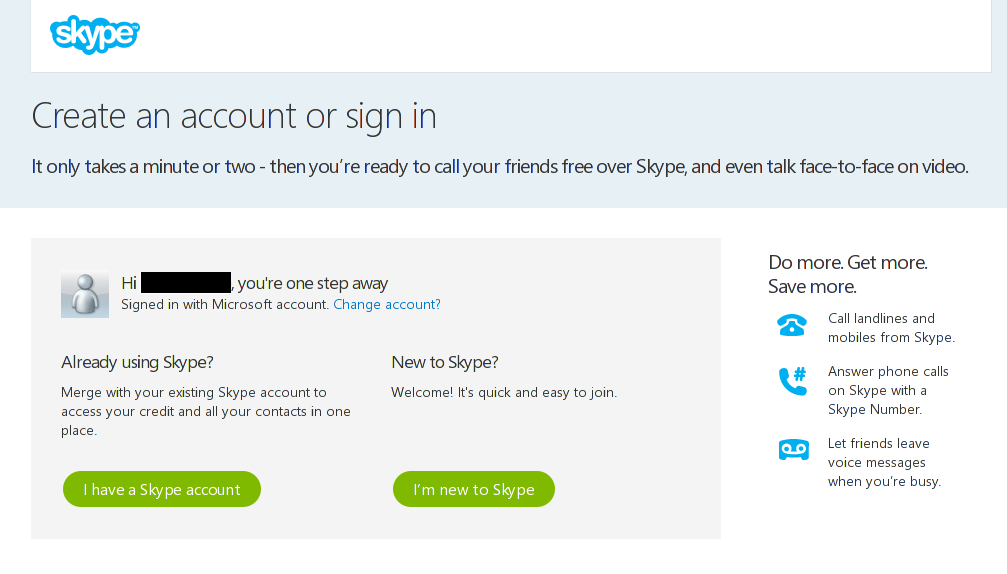 If I simply click on the green "I have a Skype account" button, it takes me back to the previous login screen, a vicious circle.

According to this article, Microsoft replaced Messenger with Skype in Outlook.com, using the Messenger infrastructure. This article discusses the Skype software no longer being necessary; it's been replaced by a browser plugin. It describes the signup process, which starts via the screen in the second picture, above, and it downloads the plugin upon completion of the signup. So the absence of Skype on my machine is apparently irrelevant.

In this article, the author describes a method for disabling the Skype integration by editing the Hosts file to block the site hosting some Skype scripts. The instructions are for Windows, and I'm not familiar enough with it to translate it to the equivalent for Linux. It isn't clear whether this would actually stop the pop-up, though (which is what blocks access to the email). The pop-up deals with signup before Skype is even installed.

These kinds of odd behaviors often disappear when ad blockers and/or tracker blockers are disabled for the site. That didn't help in this case.

So far, the problem has occurred across multiple browsers in Linux, but not with any browsers in Windows, and some of the browsers are the same on both platforms.

I can answer the question I asked and describe how I put the symptoms into remission (so far), but can't explain the underlying problem. I'll post this to help others with the same problem, but won't accept my own answer in the hope that someone else has an answer for what is actually causing problem.

Answer: The Skype enrollment popup appears to be a symptom, not the actual problem. This has not appeared at all in Windows. Microsoft does not have a new policy that a Skype account is required to access web mail. Skype does not need to be removed because the issue is not actually Skype, it relates to buggy user-account behavior. I'll share what I've learned about the symptoms and stopping them.

The problem occurs across all browsers I tried in Linux, but not with any browsers in Windows, and many are the same browser, so it isn't browser specific. It also occurs with multiple Linux distros (Debian and Mint), so it isn't distro specific. One common denominator is Java. The Linux distros use a version based on IcedTea, which is different from what runs in Windows, and some web sites are extremely finicky about their Java.

Apparently, a product called Rhino, which is used on the web site side, may be required for IcedTea to work properly. If Microsoft wanted to make life difficult for non-Windows users, they could ignore Rhino in the design of their web sites. I have no idea whether this is the case, but it could explain things.

One thing that has made this a bear to diagnose is the somewhat random nature of the problem.

There was a "memory" element to the problem (things working the first time but not subsequent times, the user account common denominator, etc.), which suggests cookies might play a role.

Solution: I went into Firefox and deleted all Microsoft-related cookies I could identify. The problem disappeared, not just on Firefox, but on all browsers. So that was the "fix" that made the symptoms go away. It is still working properly after a couple of days, and all of the other Microsoft sites are also working properly. The appearance is that this triggered some type of reset on the web side.

Actual cause and solution?

There are still aspects of this that make no sense. If the problem is cookie-based, why would cookies be similarly affected across all browsers in Linux but not Windows? Why would the one-time actions occur? Why would cookies in one browser affect behavior or cookies in another browser? If the problem is user-account based (web server side), why would it see the account differently in Windows vs. Linux, across all browsers?

Answers aren't supposed to contain questions, these are just rhetorical questions. I'm hoping somebody will post a better answer than mine.

2
How does the storage limit work on Outlook.com?
4
Are @live.co.uk and @live.com the same Microsoft/Windows live/Mail/Outlook.com/SkyDrive account?
16
Forwarding emails from outlook.com to Gmail
3
Custom domain used with Hotmail account expired, still can log in, but not receive
5
I want to remove Skype chat history from Outlook.com
0
Connect a mail.live.com address to an office365.com account - unusual activity
2
How to remove Skype from outlook.com?
0
People and Skype contacts not synchronized in Outlook.com
2
How to disable SafeLinks for NOT Outlook.com accounts?