How to move photos from Google Drive to Google Photos?

I have a lot of photos in Google Drive, in random folders.

I want to move them to Google Photos, because I really like the phone/tablet application - while the web app is... less good.

How do I put the photos there? There are both in Google Drive, I can see both "Google Photos" and my old photos in Google Drive web app, but I cannot move them there no matter how much I try.

In this confusing help article which makes the relation between Google Drive and Google Photos even less clear, Google tells me to click on "search" and then "Google Drive". That produces "No results" on both android app and web app.

While on Google Photos click Upload, (probably upper right corner), then click "Google Drive". If for some reason that didn't work, just read this short official Google help made to answer this exact question, it will tell you what's wrong.

If after clicking upload "google drive" doesn't show up, It's probably because your account is work/school. One workaround is to share the photos to a non-educational account, and follow the method given at the beginning of this answer.

Side note: If you want to go the opposite direction (Photos → Drive), then login to Drive, select Google Photos on the left side, select the picture(s) you want to move, click the action button → move, and select the Drive folder to move to.

The only way I found, which is super stupid and as anti-user-friendly as they go (I guess that's the new Google), is to

Not a good user experience. But maybe there is a better way?

Seems it has moved to drive.google.com->settings 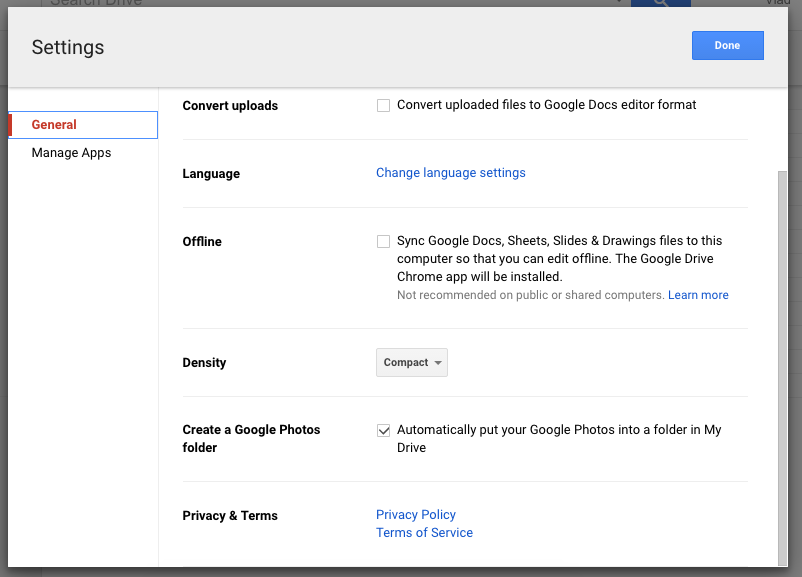 Not the answer you're looking for? Browse other questions tagged google-drive google-photos or ask your own question.