I can't find any images to show how Google groups did used to show a tree structure for usenet groups. But they did.

I am more interested in free ways to do so.

Google Groups has done away with their tree structure navigation format for browsing Google Groups in favor of breadcrumb navigation. This makes sense as a tree structure isn't very useful given how Google Groups is both a web gateway to NNTP as well as a web mailing list not compatible with Usenet. Since anyone can create a public or private Google Group, a tree navigation quickly becomes unwieldy and it doesn't appear Google cares to segregate the services; instead choosing to rely on its search tech.

A Usenet hierarchy is, reduced to its essence, a set of Usenet newsgroups that share a common naming prefix, with "." used as the separator between the levels of the hierarchy, like host names. The most popular list is provided by the Big-8 Management Board (B8MB). They publish a list of the canonical Big-8 Usenet groups to news.announce.newgroups every month and can be viewed via Google Groups at http://groups.google.com/group/news.announce.newgroups?hl=en (also mirrored at ISC, ftp://ftp.isc.org/pub/usenet/news.announce.newgroups/Group_Lists/)... It does seem silly Google Groups doesn't integrate a hierarchical list option for just NNTP groups...

Join/Star groups of interest: Most people who use newsreaders subscribe to newsgroups which is akin to "Joining" or "Starring" a group via Google Group's interface so you may want to browse that list for groups you find of interest.

Use keyboard shortcuts: For instance if you know the type of group you are looking for, you can use the hotkeys g l to quickly go to a group or search for similar newsgroups.

Keyboard shortcuts may be shown by typing the question mark character on any page within https://groups.google.com or at https://support.google.com/groups/answer/6148722

What I am talking about is within any individual thread within a newsgroup....

To reorder messages into conversation threading (messages will be reordered to who replied to whom and then chronologically):

1. Navigate to any Google Groups Topic

2. Above the first message/post, click on the Topic options icon: 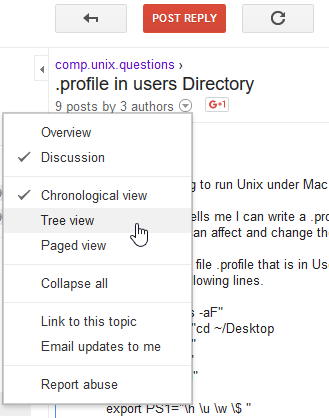 Not the answer you're looking for? Browse other questions tagged google-groups usenet or ask your own question.