I have a Google Sheet which receives information from a google form.

I would like to collate some of this data in a separate sheet (within the same document). I would like the new sheet to combine data from 4 columns into 2 Columns since the columns contain the same kind of data which we'd like see as a list. I'd also like the blank column to be removed.

The idea being that any time a new entry is made into these fields from the google form- the list would be updated in the second sheet.

I've done an example with pictures below- so columns labelled New song set 1 and New song set 2 would be combined into a list of all new songs- with their corresponding 'first lines' next to them. The blanks would also be removed (as seen in the second picture). The order of the data isn't important.

Do you know how I can do this with formalas? 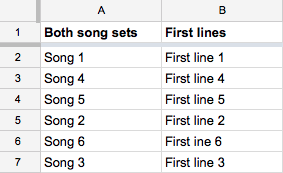 Since the order of data is not important, the following will do:

You can also sort the results by some field, e.g., by the first one, song name:

Not the answer you're looking for? Browse other questions tagged google-sheets formulas google-forms google-sheets-arrays or ask your own question.

3
Split content with multiple lines into multiple rows and columns in Google sheets
3
Single drop down with data from separate columns
1
How to combine and consolidate rows from multiple sheets into one and sort them?
0
Convert the data from comma-separated cells into repeated rows
0
Copy & Consolidate Data from Multiple Columns Into One New Column in Google Sheet
1
Display progress of combined requirements based on values in other cells & sheets
0
Need to trigger form submit when data is already populated in Google Sheet from another source
1
Create a hyperlink from two columns, one with title and one with links, then retain only the hyperlink without losing the references
1
How to select everything from two columns that have matching rows on google sheets