How to edit dates in Google Sheets as ISO 8601?

I know how to make Google Sheets display dates in ISO 8601 format (YYYY-MM-DD). Now, how do I make them not only display, but edit in the same format?

See the edit line below: 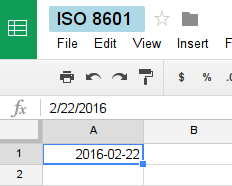 Moreover, if that is linked to a locale in use, which one would have a dollar sign as a default currency sign in addition to having ISO dates?

According to https://en.wikipedia.org/wiki/Date_format_by_country, the following locales use YMD date format:

Google participates in the below projects, so is very likely that Google Sheets use them

The Unicode CLDR provides key building blocks for software to support the world's languages, with the largest and most extensive standard repository of locale data available. This data is used by a wide spectrum of companies for their software internationalization and localization, adapting software to the conventions of different languages for such common software tasks

ICU is a mature, widely used set of C/C++ and Java libraries providing Unicode and Globalization support for software applications. ICU is widely portable and gives applications the same results on all platforms and between C/C++ and Java software.

This demo illustrates the International Components for Unicode localization data. The data covers two hundred five different languages, further divided into four hundred eighty-eight regions and variants. For each language, data such as days of the week, months, and their abbreviations are defined.

Not the answer you're looking for? Browse other questions tagged google-sheets date or ask your own question.

20
How can I change the input format for dates in Google Docs' spreadsheet?
0
GoogleSheet's Output of IMPORTXML Function Changes Format of Imported ISO Date-Time Text

3
How to make a simple two column data chart in Google Spreadsheets?
15
How can I change Google Spreadsheets to have ISO 8601 dates as default?
2
Google sheets recently changed American datetime format, how do I change it back?
28
Change Google Sheets default date format with other locale
5
Display dates in ISO 8601 format in the Microsoft Outlook web interface
1
Using a script to only take only take cells with values in google sheets
2
Convert columns of ISO 8601 strings to dates in Google Sheets
0
How to normalize different date formats when importing in google sheets
1
How to set a locale to use comma as decimal separator and Euro as currency symbol by default