Concatenate several columns into one in Google Sheets 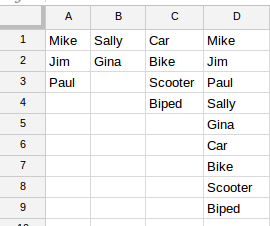 I want to concatenate/combine columns A, B and C into column D as displayed.

The number of filled entries in A, B and C will vary over time, so absolute cell addresses cannot be used.

What formula could I put into D1 to fill the column as illustrated?

You need to filter down to non-empty cells, and then stack the results together:

This is the same as this answer by grayob which is unfortunately buried under outdated answers.

A shorter version of the formula in this other answer

A little longer, but can be constrained to a limited array (not whole columns):

where the order does not matter. Where it does:

Now that Google Sheets has the FLATTEN and QUERY functions, this is an option:

This will work with whole-column ranges, although there could be performance issues with extremely large spreadsheets: 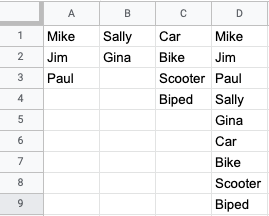 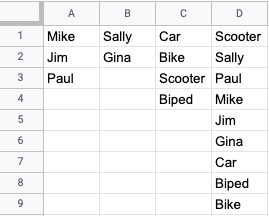 19
How Do I Combine Columns In Google Spreadsheets?
1
How to use INDIRECT to create a dynamic length range?
0
Google Sheets querying and sorting data from multiple sheets