I'm trying to create a sheet where Sheet1 is a dump of data and Sheet2 contains:

I pretty much immediately wrote off the checkboxes as helper cells and created a hidden query to dump everything that was marked true in what I'm going to call Range_Items (Though I'm really just referencing the cells they were dumped in).

I haven't tried limiting the final query against the date range yet, because I'm having trouble making it pull from Sheet1 against the Range_Items list. So I tried paring it down to a simpler formula for concept and still can't seem to figure out why it won't pull anything. This is the simplest iteration I can think of:

But when I try C = Or('Expense', 'Transfer') using cell reference or lack of single quotes, I get hit with errors.

I'm sure the problem is the syntax, but I really can't tell what's stopping it.

Some other attempts I've tried include:

I've tried a billion combinations of single, double, and & insertions. Any help would be greatly appreciated.

google-sheets formulas google-sheets-query
Share
Improve this question
edited May 15 '19 at 13:46 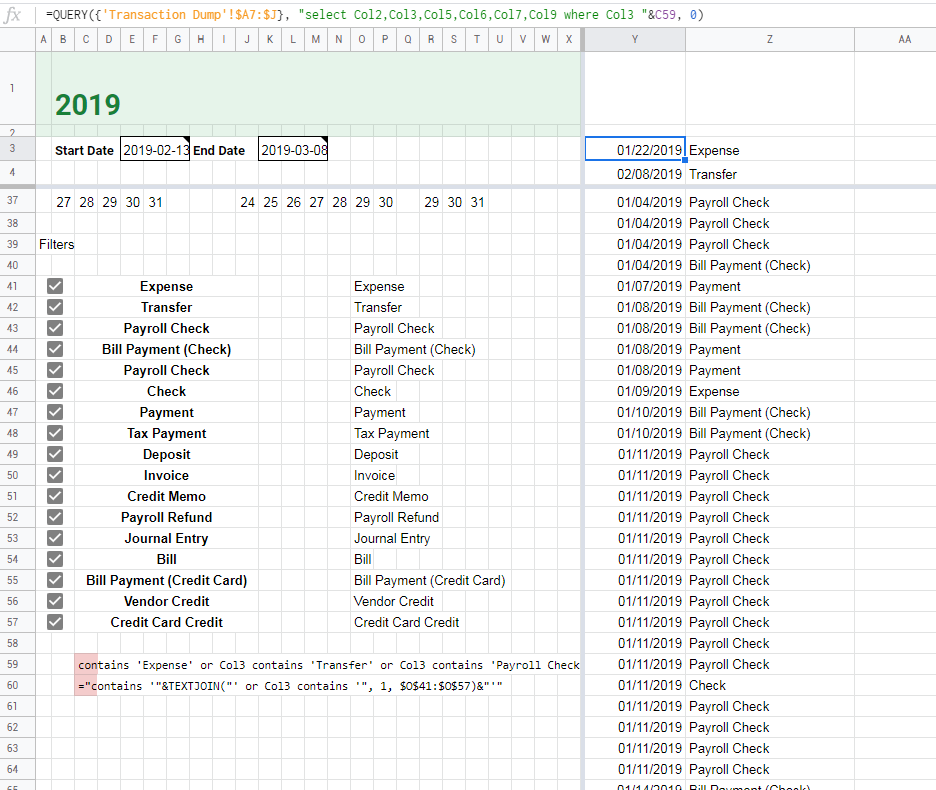 Not the answer you're looking for? Browse other questions tagged google-sheets formulas google-sheets-query or ask your own question.

5
How can I create a QR code that links to a specific cell in Google Sheets, but can be edited, not just viewed?
1
How to make Query() not break with empty cells
0
Is it possible to use checkboxes to determine what data is in a list?
1
Count query based on multiple conditions
1
Query Function - remove parts of entered term and carry out formula
0
How do I set conditional formatting based on matching from a list on another sheet in Sheets?
0
How to run a google sheets query against a dynamic range