Displays data arrays with appendrow where other columns contain data

I wrote a script to display a list of names and folder IDs.

I want to add new data in column C. After I fill in a text in column C, then I run the script. But the second row is empty. 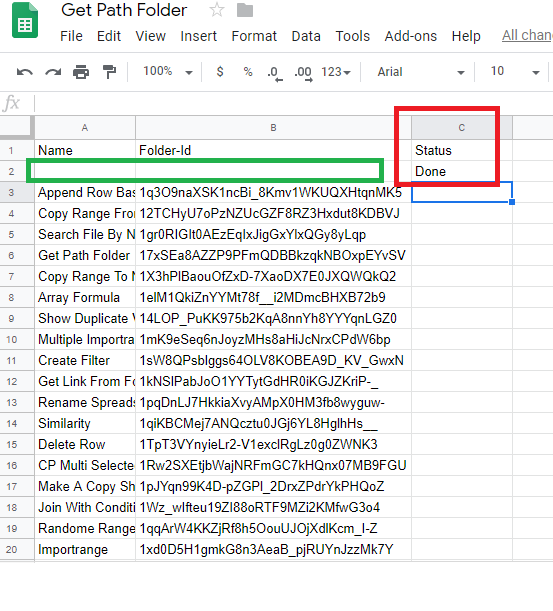 Regarding the rev 2 of the question

I don't think that the modified code line produce the result of the previous code and it's shown in the image because it writes data over and over the same range.

If you will go to use that code line then the first argument should be a variable corresponding to the row where the data will be written.

I reiterate that a better practices is to avoid the use of Google Apps Script methods inside a loop, instead create an array that hold all the values to be added to the sheet then add them on a single statement (it's implicit that it will be out of any loop).

About the rev 1 of the question

appendRow(rowContent) adds the rowContent to the first empty row, so if you will be writing data on column C, instead of it use setValues(values).

It's worth to note that Google Apps Script methods are slow so it's advisable whenever is possible to avoid their use on loops. To do this use your loop to create an array of values, then on a single statement pass the array to the spreadsheet.

1
Check from spreadsheet and add into Calendar, and place a controller not to repeat old added values
0
Is there a way to use IMPORTRANGE within an array formula and for this to be dynamic?
0
How to get new Google Form responses to take on non-form functions in Google Sheets
2
Why would I be getting the error: Too many simultaneous invocations: Spreadsheets on a simple once a day trigger?
1
Select All Columns Where Cell In Columns Contain A Word - Google Sheets
1
How do I copy data from multiple Google sheets and paste into master Google sheet while maintaining format?
0
How to combine multiple ranges with getRange in order to clear the contents of specific cells?
0
Problems with form and appendRow
0
Google Sheets - efficiently aggregating one column for grouping, based on minimum value in another column?