I am amazed that there isn't an authoritative answer to this seemingly common request. No, I DON'T want to get rid of the Promotions category, which is mostly useful, but I want a simple way of saying - don't put mail from this sender into my "Promotions" - i.e. junk - folder. There is no obvious way to do this, either on the Gmail web page on my computer or in the Gmail app on my smartphone.

There is a "Not Promotions" button in the UI when a "Promotions" email is opened that moves that particular email from the "Promotions" category to the regular inbox, but this is just for that email, not from others from the same sender. Nor could I find any UI in the Global settings or on the Promotions tab itself allowing for what I want to do.

I look in vain for anything authoritative (i.e. from Google) answering this question. I find this which seems to be from a low-level Google staffer (a "diamond product expert", whatever that is) trying to be helpful, rather than an authoritative statement of how this is supposed to work from those who designed it. There is one apparently pertinent piece of advice there:

To correct, you can just drag and drop one such message from Promotions to Primary and click Yes on the confirmation black box for all future messages.

However, the "confirmation black box" described there for all future messages does NOT pop up upon making such a move. Evidently, it must have been there once, which leads me to ask, since they took it away, is the default to move all future emails from that sender or to move none of them?

It seems as if Google is just sort of adding features to Gmail willy-nilly without understanding how their users use existing features and what their changes might or might not break. I would expect better from Google.

Another site I found is for spammers, trying to help them get around the "Promotions" hassle for them. It suggests having users move the emails from Promotions to Inbox will automatically do the same for all future emails, but this page was written in 2013 and no longer appears to be the case. 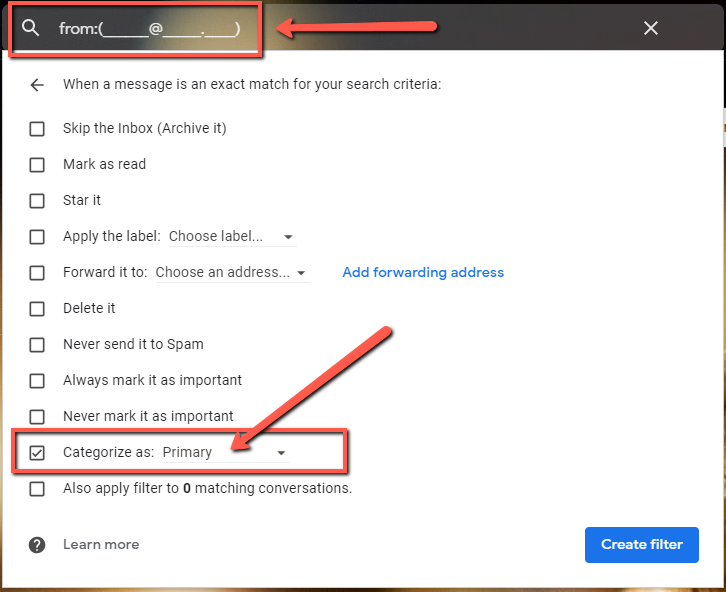 Not the answer you're looking for? Browse other questions tagged gmail gmail-filters gmail-categories or ask your own question.

41
How to make Gmail automatically label incoming emails
20
Automatic Gmail labels based on sender
4
How does Gmail Categorise the email as Primary, Social, etc.?
1
How to move messages in "Social" or "Promotions" into "Primary"
1
How to make a filter to archive messages on "Promotions" category?
0
How can I train/teach GMail which "category" email should be filed under?

2
How should I clean out my Gmail inbox?
3
Disable Gmail automatic categorisation?
4
Can filters be created based on categories?
11
Is there a way to reorder the category tabs in Gmail?
1
How to make a filter to archive messages on "Promotions" category?
0
How to completely disable Gmail categories and see all messages in inbox?