Is the 'default' calendar in Google Calendar unique?

What I have noticed is that in the settings section for one of my calendars, that (1) I am listed explicitly as the owner, and (2) at the bottom of the settings for this calendar, there is only an option to 'Remove' the calendar.

Why is a single calendar behaving differently? I can't seem to find any documentation that Google Calendar has a 'default' or 'primary' calendar, but it seems like it does.

Does anyone have insights into this? Thank you.

Google Calendar has a concept of a "default" calendar - it is known as the "Primary" calendar.

The [Calendar Service documentation] is described as "allow[ing] a script to access and modify the user's Google Calendar, including additional calendars that the user is subscribed to." (emphasis added)

It's probably true that the run-of-the-mill documentation doesn't spell this out, though one might suggest that an end-user is interested only in "their own" calendar, and that they understand that they can create or subscribe to other calendars.

The Calendar API has more information including this self-explanatory image. 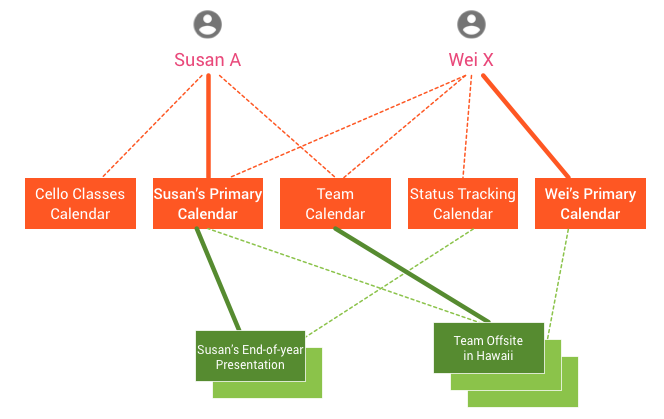 The detailed API documentation describes the Primary Calendar as follows:

In addition to the primary calendar, you can explicitly create any number of other calendars; these calendars can be modified, deleted, and shared among multiple users.